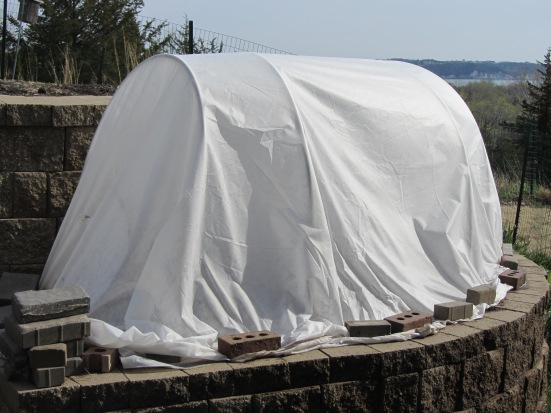 In my experience, the row cover excludes deer, rabbits, and other mammals that eat vegetables because the crop is out of sight. The cover can shield against harsh wind and extend the season due to the greenhouse effect within the covered space. Light is filtered, dependent on thickness of the cover. Lettuce is an example of a crop that can take a thicker cover. Balance of light filtration for crops you grow and sturdiness of cover for windy days, varies with the site. I have found that tomatoes require a thin cover and so we grow our tomatoes fenced elsewhere. Hoops are small diameter PVC pipe and allow about 3 ft. height for plants to grow. The pipe is about 8 inches in the soil to be sturdy. I have tried other ways to hold the cover in place. Bricks hold the cover well and yet allows movement of the cover against smooth PVC so that holes don’t form in the cover. To water, although the cover does allow rain to penetrate, Just remove a few bricks and raise the cover. Crops I have had success with using the row cover are: snow peas, spinach, Swiss chard, sweet peppers, and carrots. Insects are generally deterred. I try to set up the row cover as soon as the ground is workable and end in November with a succession of crops during the season. With the above vegetables, produce is ample. i have not opened the cover for insect pollination as do some, but the wind provides motion within the space. I welcome your comments. If you have tried some form of row cover during the season, tell us your experiences.