The list was published in “Plant Exchange” in the Yankton Press & Dakotan newspaper on Friday November 13th. A few items were added later. Thanks again to all who contributed. Link to that article is:

See the list below provided by contributors. Internet search for more information about the ones that interest you.

Coleus: Lois Quatier says her container coleus collection came from a friend, Evelyn Schindler, who gave them as cuttings 2 years ago. They grew to 4 ft. and she overwinters small cuttings for next year. Yankton. Town and Country Garden Club. Thanks to Lois Quatier for the photo. 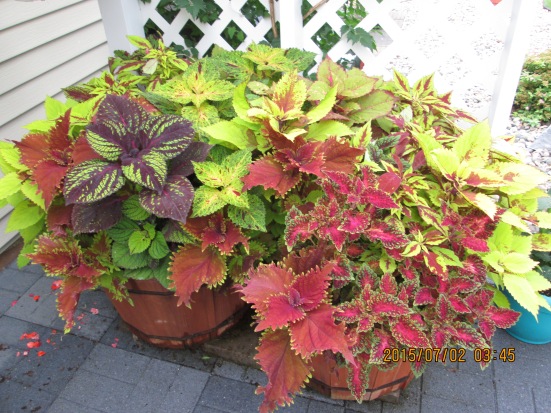 Silver Lace Fern ‘Evergemiensis’: Jean Koupal likes the variegated, delicate silvery green leaves with compact growth. She plants it outside in spring and brings it indoors in winter. It’s a topic of conversation with her gardening friends. Yankton. Missouri Valley Master Gardeners.

Celeriac (Apium graveolens var. rapaceum): Theresa Nordin says celeriac is root celery. Mild flavored, she uses it in soup, salad, and stir-fry. She starts it in January or February because it needs 100+ days to grow but is worth it. Summerset. Pennington County Master Gardeners.

Tomatillos: Vicki Gardner says she planted them the year before but they were not ripe by frost. They came up all over the garden this year and ripened. She canned 18 jars of tomatillo salsa and is sure they will reseed for next year. See Internet for recipes. Seneca (between Faulkton and Gettysburg.)

Red Russian Kale: Tom Thorson and Rob Simon have tried several varieties of kale and like this one because it is tender, pretty and productive. They eat it raw in salads and cooked as a side dish or chopped into soup or stew. Hill City. Rapid City Master Gardeners.

Patterson Yellow Onions: Tom Thorson and Rob Simon say these onions have grown well for three years in a row and store all winter in a drawer. Hill City. Rapid City Master Gardeners.

Little Bluestem (Schizachyrium scoparium): Muriel Sorbel says little bluestem is a bunch prairie grass that she likes for the upright growth, seeds it produces for birds, and coloring. It is bluefish green in spring and summer, turning copper to red in fall and winter. I like how it moves in the wind. Yankton. Missouri Valley Master Gardeners. Thanks to Muriel Sorbel for the photo.

Thalictrum (‘Elin’, ‘Black Stockings’,‘Ichangense’ and others): Tom Thorson and Rob Simon say these perennials are pest resistant, have beautiful foliage and flatter plants around them. Elin grows at least 8 ft. tall. Black Stockings is dense with a lot of flowers. Ichangese is an unusual ground cover that knits with other plants. Hill City. Rapid City Master Gardeners.

Cerinthe major: Tom Thorson and Rob Simon say this annual has blue green foliage and true blue flowers that draw you in. They do well in heat and a lot of light. Hill City. Rapid City Master Gardeners.

Mother Of Pearl Poppies: Tom Thorson and Rob Simon say these grow in some shade as well as sun. They keep blooming once they start. Colors are surprising and exquisite, from pearl gray to black cherry and pale orange sherbet or pure white with variety of pollen color. Hill City. Rapid City Master Gardeners.

Penuts: Martha Ausborn says she has planted peanuts before but this is the best yield by far—between 4-5 gallons of peanut pods. Now she’s looking for how to prepare them. Yankton.Thanks to Martha Ausborn for the photo.

Okra: Connie Jensen says she sautés okra and adds it to canned dill pickles. She grills okra by adding salt, pepper, onions and olive oil and wraps it in aluminum foil. She enjoys okra blooms, with okra a member of the hibiscus family. Gayville. Pasque Garden Club.

North Star Cherry Tree: Marlene Ohnstad says that her cherry tree has breathtaking blooms in spring and heavenly aroma. She makes great jelly with the fruit and many kinds of birds enjoy remaining fruit. Rural Beresford. Sioux Falls Area Federated Garden Club. Thanks to Marlene Ohnstad for the photo.

We hope you enjoyed this season’s standout list contributed by gardeners from South Dakota. Plant Exchange Blog is about plants of the USDA Zone 4-5a region and the people who grow them. We post weekly and hope you will visit often.