Who wouldn’t want sweet peppers growing on your deck at easy picking reach? Thing about these plants is that this is the second season for them in this container. I brought them indoors last fall to extend the season. To my surprise, although they did slow flowering and producing peppers, this continued all winter indoors. They were in an area that received about an hour of direct sunlight each day. Since they were still viable, I put them outdoors again this season and you can see the results. I did add time-release fertilizer this spring. So I learned that these peppers are perennials in these conditions, and that even on the Northern Plains it is possible to grow this plant indoors. 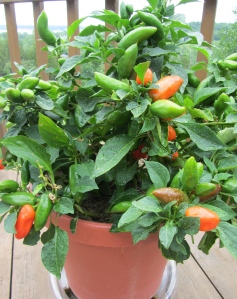